From the very first moments in the hospital I learned that I had to be an advocate for my son’s health. As a first-time mom there is a huge learning curve and naturally you tend to lean on the education and wisdom of providers in the field. Unfortunately (in our case) over the course of three and a half months one midwife, a handful of nurses, three pediatricians, and two lactation consultants never noticed that my son had a tongue-tie.

There are some conditions out there that medical professionals aren’t necessarily up to date on. Or perhaps they don’t see enough cases to consider those possibilities when parents are struggling. The only words of advice we got during our son’s extreme colic phase was “It will pass in three to four months.”

What is a tongue-tie?

If you are like me, you have never heard of a tongue-tie before. No one in my husband’s family or my family ever had one. A tongue-tie is a condition present at birth that restricts the tongue’s range of motion. The tongue is attached to the bottom of your mouth by a band of tissue (lingual frenulum). An unusually short, thick, or tight band can prevent the child from being able to properly move their tongue.

What does this mean in simple terms? Can you touch the roof of your mouth with your tongue? Our son couldn’t.

Common symptoms of a tongue-tie

As with adults, not every baby is the same. While these guidelines provide great examples of what to look out for, we didn’t relate to many of the common symptoms. My son was colic and had extreme gassiness and reflux. I never had pain or issues while nursing. I never had a low supply and my son gained weight beautifully. When the possibility of a tongue-tie was first brought to my attention and I looked up the symptoms, I thought there was no way my son had a tongue-tie. 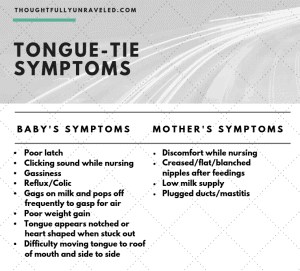 Who can diagnose and treat a tongue-tie and how do they revise it?

A pediatric dentist or an ENT are specialists that can diagnose and revise a tongue-tie. Revision is done by cutting the band with sterile scissors or using a laser.

The procedure is very quick, but it is so emotional and pulls on all those mama heart strings. Your baby is restrained by a swaddle and placed on a board that is balanced at one end on the specialist’s lap and a parent’s lap on the other end. Protective goggles are placed on your baby and the doctor comes from above the head. The mouth is pried open and the tongue is held in place while they cut through the band.

As you could imagine there was no way I wanted to be in the room while this was happening. My husband took one for the team (my hero!) while I sat in the car. Once the procedure was done I came in for cuddles and to nurse.

I’m not going to lie. These exercises are excruciating as a mom. For 2 full weeks you must pin your child down every 3 hours, put your finger under their tongue, and rub along the surgery area while moving their tongue around so it does not reattach. One tip. Use coconut oil! We found that this helps to create a great lubricant between your finger and the surgical area.

Not all tongue-ties need to be fixed

After our son had his tongue-tie revised we started to hear stories from friends and coworkers about their experiences. Turns out something we had never heard of before is actually quite common. One of my coworkers ended up having her tongue-tie revised when she was 12, because it was causing her gums to recede. A friend had theirs revised as a kid because it was causing speech problems.

I also know adults who have never had theirs revised and have had zero issues. For us, it prevented our son from being able to create a tight seal while nursing or on the bottle. He took in a lot of air creating the gas so it made sense for us to revise his. If you are told your baby has a tongue tie, but they really aren’t experiencing issues then it may not be something you even have to worry about.

After three and a half months of sleep deprivation and hours upon hours of a screaming child I had hit my wall. My husband was about to go into a two-month period of long work hours and I would essentially become a single parent. In hopes to try and bring some order to the extreme chaos we had been struggling through I reached out to a local sleep consultant that our pediatrician recommended.

Her first reply to me was, “Has he been checked for a tongue-tie?” When I mentioned that he had no issues gaining weight and I had no issues nursing she said that some babies don’t show those signs. If nothing else it was worth ruling out.

The pediatric dentist confirmed his tongue-tie and we had it revised right before he turned four months. It was like night and day and he became a completely different baby. We noticed almost immediately that his gassiness subsided and the fussiness improved.

You know what else was fun? Watching our son for the first time be able to use his tongue. He started making clicking sounds and fart noises. We would catch him sticking his tongue out and begin to giggle. Seeing the range of motion he all the sudden had really put into perspective just how restricted he had been.

Now when we look back at photos from those first few months it is so obvious that he couldn’t’ fully lift his tongue. Below are two photos from his three month photo session. In the first photo you can see the band attachment at the base of the tongue if you zoom in enough. In the second photo you can tell how he can’t lift the tip of his tongue fully as the band is holding it down. 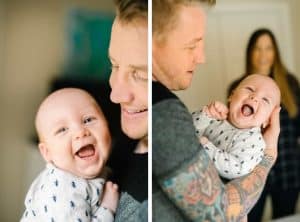 I try not to beat myself up over it too much. While logically I can reason I didn’t even know what a tongue-tie was, I think I will always have some mom guilt associated with his first few months of life. My baby boy struggled for four months before we figured out how to help him. In a perfect world I wish we would have discovered this sooner. I’m grateful that we eventually did and those colic days are becoming more of a distant memory.

Does anyone else use nap time to make meals? #ad N

Just living his best life ✨ Noah is in the phase

When things are heavy, I go inward. I’ve always

As moms we all want what is best for our kids. It

For better or worse Noah got his love of outdoors